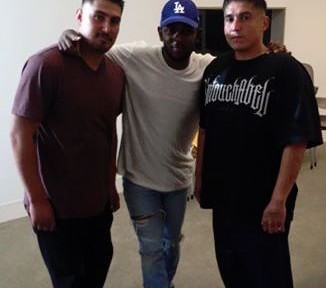 Two victims in a deadly double shooting in East Los Angeles have been identified as the brothers of Compton Councilman Isaac Galvan. Detectives said the victims were walking south on La Verne Avenue when they wereapproached by a male suspect. The suspect then shot both victims, got into an SUV and fled. Both victims were transported to a hospital, where one of them succumbed to his injuries. The second victim was shot in the foot and was expected to survive. Sheriff’s officials said the shooting was gang-related, and the victims appeared to be targeted. Galvan posted the sad news on his Facebook page Monday:

“I want to first of all thank God for all he’s done in my life. Unfortunately today my little brothers were both victims of a senseless drive by shooting in front of my mothers house. I’m glad my little brother Dennis was able to go home today by only being shot in his foot. I’m sad to say my other little brother Larry did not make it. He was shot multiple times in the chest and died of cardiac arrest. I really to thank everyone for there thoughts and prayers for my family. All though my brothers life was tragically cut short at the young age of 27. I do find solace in knowing that before he left this earth he knew the lord and I’m certain he was able to call out to him before he left us. My little brothers life will not be in vain. He leaves behind 3 brothers, a mother, many friends and 3 beautiful children who through there lives his memory will live on. I’m glad before he was taken away I got to spend more time with him. He is pictured in the black shirt at our Compton toy giveaway this year. Both of my brothers were excited to meet Kendrick Lamar and I’m glad there were able to that day. It’s through Tough times like this where you have to trust in God and know that this is apart of his plan. I will always love and miss my brother Larry. Now it’s my job to make sure that his death is not in vain and to make sure that I’m there and a good example to his children. I ask you to please keep my mother and brother Dennis in your prayers. Thank you all and God bless you”