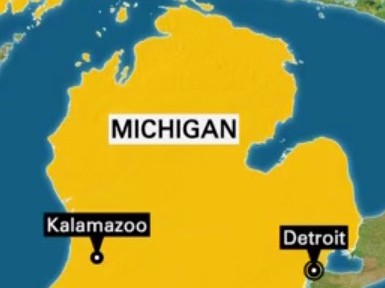 At least six people were shot and killed Saturday by someone driving around Kalamazoo County, Michigan.

Nine people were shot in three different locations, cops said. Two people are known to be in critical condition, and at least one is in serious condition. “What it looks like is we have someone just driving around, finding people and shooting them dead in their tracks,” Matyas told CNN affiliate WOOD TV. h/t cnn

The suspect is believed to be a white man in his 50s. He is still at large. They are looking for a dark blue or silver Chevrolet HHR.

Some of the shootings occurred at a Cracker Barrel and an auto dealership. The dead and injured were said to be sitting in their vehicles at the time they were targeted.