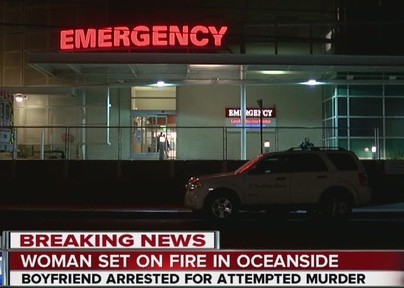 An Oceanside, CA., woman was hospitalized on Saturday with severe burns suffered after her boyfriend, Ricardo Gonzalez, doused her in gasoline and set her on fire Friday.

EMS responded to reports that an unidentified woman was on fire. She was transported to the UC San Diego Medical Center Burn Unit in San Diego. She is expected to survive. Gonzalez, 33, of Oceanside, was booked into the Vista Detention Facility on Friday night after being interviewed by detectives. He was arrested on suspicion of one count of attempted murder and one count of felony domestic violence, according to Keim. Gonzalez allegedly told police that he and the victim got into a fight in front of the house, and that he then got a gas can out of the garage, poured it on the victim and lit her on fire using a lighter. h/t fox5sandiego Gonzalez suffered minor injuries in the attack, but did not require medical attention, Keim said.