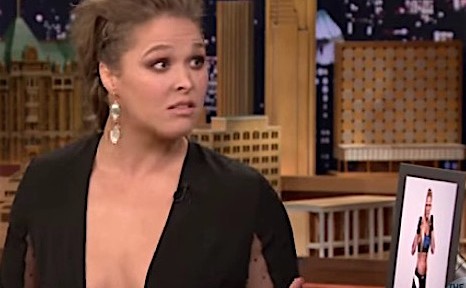 Rousey posted the image to her Instagram, but after getting exposed on social media, she came forward claiming she was unaware it had been tweaked. I have to make an apology to everyone – I was sent a picture to share on social for Fallon that was altered without me knowing to make my arms look smaller. I won’t say by who – I know it was done with severely misplaced positive intentions – but this goes against everything I believe and I am extremely proud of every inch of my body. And I can assure you all it will never happen again. I could not be more appalled and hope you all forgive me.

Once she was outed, nine hours later, Rousey attempted to clear the air, posting both the altered photo and the original side-by-side. “This goes against everything I believe and I am extremely proud of every inch of my body.”