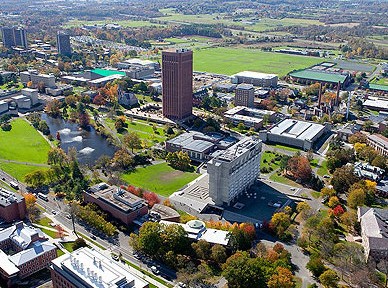 Students at UMass Amherst have been alerted to shelter in place after reports of a “hostile armed person” on campus Thursday night.

A UMass Police say a gunman was seen on campus. No one has yet been arrested, and no shots have been fired. A perimeter has been set up. According to Daniel Fitgibbons of the UMass News Office, a student called in a report of a gunman at around 5:45 p.m. One or possibly two armed hostile people were seen inside the dorm. 22News received multiple photos of text alerts sent to students from UMass that the armed suspect was seen showing a handgun at Pierpont Hall. The first suspect was described as being a white man wearing a dark colored shirt and a gold chain. The second suspect is described as a white man in a gray sweatshirt. h/t wwlp