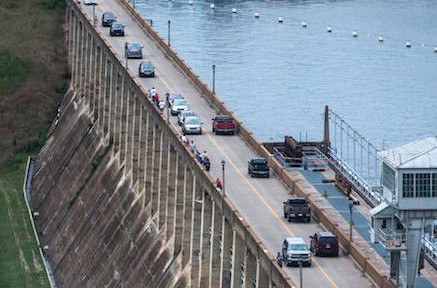 The sheriff’s office in Camden County, Missouri, alerted the FBI to a report of “Middle Eastern” men asking questions about a local dam.

Police said the incident took place around two weeks ago at a Golden Corral in Osage Beach. A deputy was eating lunch and a wait staff told him that the men men were asking about Bagnell Dam, wondering if they could rent a boat and tour it. The dam is considered a legitimate tourist attraction, with people from around the world coming to see it, Lake News noted. The Camden County Sheriff’s Office told Lake News when it received the tip, it was forwarded to the FBI and a joint task force on terrorism. However, the sheriff’s office of nearby Miller County, in whose jurisdiction the dam lies, said there’s no heightened risk for the dam. It said that the office has been in contact with the St. Louis security office for the dam, and it added that patrols are continuing as normal. h/t theepochtimes Bagnell Dam, a hydroelectric facility, impounds the Osage River in Missouri, creating the Lake of the Ozarks.