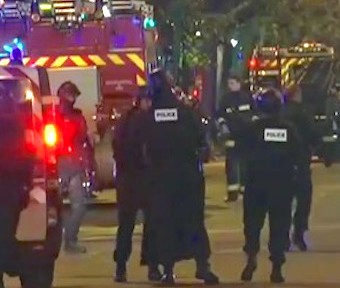 Muslims screaming “Allahu akbar” murder at least 35 60, take 100 hostages,” by Robert Spencer, Jihad Watch, November 13, 2015. Islamic jihadis have long had France in their crosshairs. The Islamic State last year urged jihad attacks against the “spiteful and filthy French.” These attacks took place near the site of the Charlie Hebdo massacre. That massacre was an attempt to force the West to adopt Sharia blasphemy restrictions; there will be more of that. h/t pamelageller There are said to be at least seven different attack locations. Time will tell whether or not Islam has anything to do with the attack. The attack at the Eagles of Death Metal concert has taken the most lives and hostages are reporting “systematic on-going killing.” The singer of the Southern California band is said to have escaped the carnage via a backstage door.