Meet Goliath: The Cow Who Thinks He’s A Dog 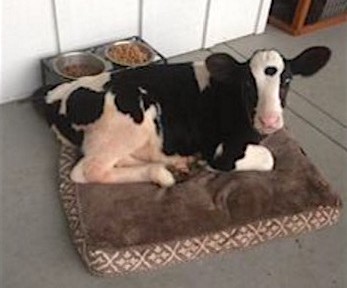 Introducing Goliath, the baby cow, who thinks he’s a dog. Shaylee Hubbs, Goliath’s owner, says he prefers resting on a couch opposed to a field, and preferable relax in the same position as man’s best friend might.

Hubbs says he opened the door one day and Goliath moseyed in and immediately assumed the role of a lazy pup, “My cow thinks he’s a dog. We left the door open for 5 minutes,” lamented Hubbs. Goliath was slated to someday end up on the dinner table, but Hubbs has changed all that, vowing to continue caring for the animal until he meets his natural demise.

A pile of hay? Pile of shmay! Goliath dines from an exalted iron and stainless steel dog bowl fully stocked with meat-free kibble. Hobbs has not commented on whether or not Goliath is house trained but then again, maybe some things are better left unsaid. And just in case you were wondering, yes Goliath loves to be pet and scratched on the his back, head and rump roast area. And not necessarily in that order.