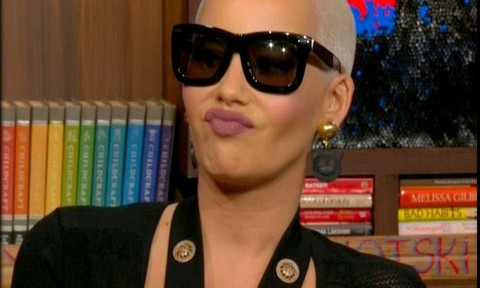 Amber cut Andy off, saying, “Not doing it”.

Andy Cohen had no luck with getting any information out of Rose, who decided to play the game with her own rules.

Cohen tried to ask her another question and Rose stated, “No, I am not talking about Kanye West or the Kardashians. Not in a negative way…but they are not relevant to my life”.

The Bravo host told Amber, “Congratulations on doing the worst job on Plead the Fifth and not answering any of the questions”.

On Monday, Cohen posted a photo of himself looking pissed with the caption, “This was my mood after last night’s #WWHL”. In another segment, Rose was required to say ‘one nice thing’ about celebrities she has had beef with in the past.

She was asked about Kim Kardashian, hesitating to find something positive to say. Amber then answered, “Err, she makes beautiful babies”. Author Iyanla Vanzant gave her a little help for an answer, with Amber stating, “He’s wearing a very nice hat in that picture”.

Rose appeared surprised that Mariah Carey was on the list as a rival.

The model said, “She’s a queen, I love Mariah, just because Nick manages me doesn’t mean I don’t love Mariah”.

Rose recently had a tough time getting other female celebrities to help with her “Slut Walk”. The charity project was to help the victims of sexual violence.

She was angry that some female singers refused to take part in the event, asking for “30 to 40 thousand dollars” to participate. But she refused to name the women.

Amber Rose said, “I really don’t want to put them out there Andy. But I feel like, as a woman, they should have jumped on board”.

She also revealed, “I was called a slut when I was still a virgin. I got ridiculed in high school because of what they assumed I’d done”. At one point in the interview, Andy asked her to remove her sunglasses, but flatly refused. She said, “I’m drunk, sorry, I’m not doing that”, before adding, “I’m like the worst guest ever on this show.”

Cohen quipped, “You’re in the running”.

Amber discussed the craziest rumor she has ever heard about herself by a fan that called into the show.

During the after-show segment, Amber received a surprise call from the former house mom at a topless bar she worked at in Philadelphia. Images: wenn.com/Bravo
POST NOWTWEET NOW