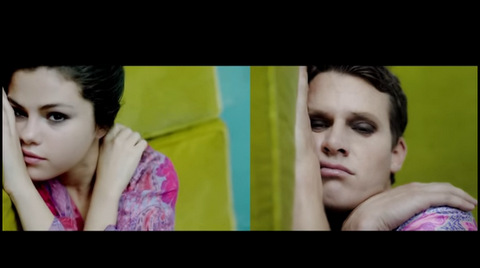 Comedian Daniel Tosh showed off his feminine and sultry side in a funny new music video, recreating the Selena Gomez music video, “Good For You”.

Most of us know the funnyman from his hilariously offensive Comedy Central show Tosh.0, his stand-up comedy, and for voicing the adult cartoon “Brickleberry”. The 40-year-old comedian pulled out all the stops and recreated the video frame-by-frame, but also added a special guest.

Daniel wore the same outfits as Selena, which included a colorful robe and a wet t-shirt.

Instead of having A$AP Rocky rap his verse in the video, Daniel had comedian Carrot Top take over. The prop comedian even joined Tosh in a disturbing shower scene.

So what possessed Daniel Tosh to mimic Selena’s music video? Maybe he finds it amusing to see the former Disney star try to be seductive.

Tosh tweeted about his remake of “Good For You”, simply explaining, “why? because i know every word to the @selenagomez song ‘good for you’ and i have lots of money.”

Well, that’s a good enough reason for us!  Enjoy!

Which version of “Good For You” do you like best?