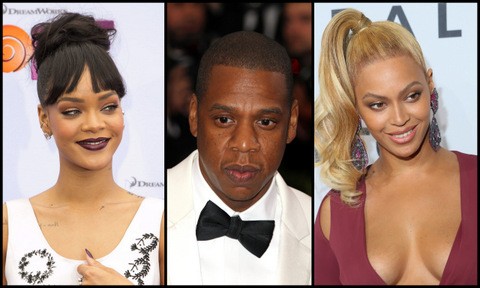 There were rumors spread to help thrust RiRi into the spotlight, but Beyonce wasn’t certain if there was possibly more to the story.

A former member of Rihanna’s camp admitted to author J Randy Taraborrelli that he made up the scandalous stories to draw attention to the teen’s career. Taraborelli agreed that the rumors were false, but that Beyonce actually believed the gossip.

Taraborrelli spoke to Entertainment Tonight on Thursday, stating, “Beyonce didn’t know what to make of this, and it actually ended up breaking them up for a time. They spent maybe a year apart from each other because Beyoncé just wasn’t sure of what to make of the situation with Rihanna.

Jay Z and Beyonce were back together in 2006, but the RiRi subject remained a sore spot in the relationship.

The couple tied the knot in 2008 and are now parents to a three-year-old daughter named Blue Ivy.

Most of us recall the crazy elevator fight in May 2015, when Beyonce’s sister Solange was caught on the New York’s Standard hotel surveillance camera punching and kicking Jay Z after the Met Gala.

The author spoke to several people close to Beyonce, explaining that eyewitnesses heard the Single Ladies singer tell Jay he was not allowed to attend Rihanna’s after-party.

Following Solange’s bizarre attack, Beyonce and Solange left in one car and Jay Z left in another.

Becoming Beyonce: The Untold Story will hit bookshelves on October 27.