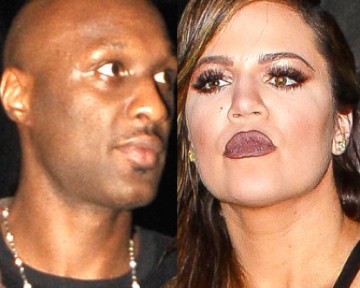 Lamar Odom and Khloe Kardashian‘s divorce was never finalized due to a california court backlog, which means it will be Khloe who decides whether or not pull the plug on his life support system. Medical professionals have reportedly concluded that the former basketball player is “brain dead.”

Khloe rushed to her estranged husband’s Las Vegas bedside after he was found comatose from a toxic mix of cocaine and opioids. Now khloe will face the daunting task of deciding to disconnect his life support.

This morning, we spoke with a member of Lamar Odom’s family – who confirmed that Lamar’s condition is EXTREMELY DIRE. Lamar’s family told MTO, “Lamar did not have a will or anything. So whatever money he has [his fortune is estimated to be $50 million] will go to Khloe and not to his kids. And she’s his next of kin too . . so she decides if they stop lifesaving measures.” We’re told that Lamar’s children and his ex-fiance Liza Morales arrived in Las Vegas early this morning. h/t mto

Under Nevada law, Khloe has the right to make all decisions regarding his continued medical treatment, a responsibility that supersedes Odom’s family members including his children.

Odom is said to be experiencing ongoing strokes and seizures as he fights for his life.

An MRI revealed since being admitted to the hospital in Las Vegas Tuesday night, Lamar suffered multiple strokes. It’s unclear if brain damage resulted from the strokes. We’re also told Lamar is on a 3-5 hour dialysis for kidney failure. h/t tmz

Former teammate, Kobe Bryant is said to also be at his bedside.