NASA: It Happened! We Discovered Water On Mars 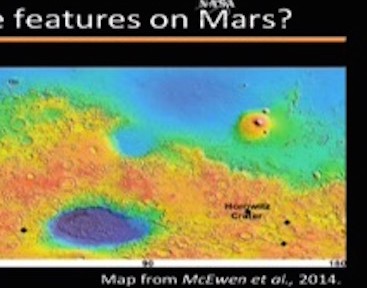 The search for life on Mars has been the subject of countless science fiction movies while sparking the imagination of as many, but now, the planet with the reputation as desolate and lifeless, may actually contain the most important key to life, water.

Scientists reported on Monday that conclusive signs of water have finally been found on the surface of the red planet, a finding that supercharges speculation that life could in-fact exist. “This, I think, gives a focus of where we should look more closely,” said Alfred S. McEwen, a professor of planetary geology at the University of Arizona and the principal investigator of images from a high-resolution camera on NASA’s Mars Reconnaissance Orbiter. In a paper published in the journal Nature Geoscience, Dr. McEwen and other scientists identified waterlogged molecules — salts of a type known as perchlorates — in readings from orbit. “That’s a direct detection of water in the form of hydration of salts,” Dr. McEwen said. “There pretty much has to have been liquid water recently present to produce the hydrated salt.” By “recently,” Dr. McEwen said he meant “days, something of that order.” h/t nytimes

There have been fleeting hints of recent liquid water, like fresh-looking gullies, but none have proved convincing. Until now.