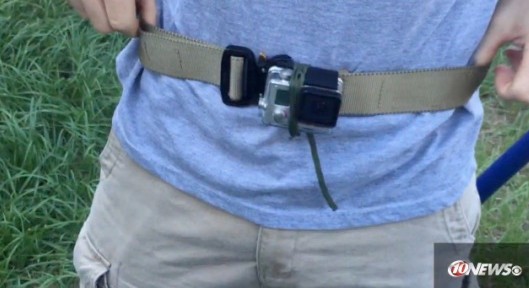 A Florida man secretly wore a body cam to record his wife’s pattern of abuse, that included her striking him, without warning, in the testicles.

Michael Novak, 37, recorded his wife, Corinne Novak, 37, striking him as he was trying to unbuckle their twin 2-year-olds from a car seat. After hitting her husband, Corrinne can be heard on the video saying “go ahead call police, I’ll gonna tell them you just assaulted me.” As he bends over, water bottle in one hand, the camera records a flash of what appears to be a hand grab his genitals from behind. “Stop! What the?” Novak says. “Go ahead, call the police,” says a woman identified as Corinne. “I’m gonna tell them you just assaulted me.” Novak, an Army Ranger, told reporters, “I started to wear the camera to maintain and prove my innocence.” He used parachute cord to secure it around his waist to document the alleged domestic violence. h/t pix11

Police, citing the hidden video, arrested Corinne Novak and charged her with domestic battery. She was later released after pleading not guilty to the misdemeanor. A court date has been set.