Radio DJ Sues Taylor Swift: You Lied! I Did Not Grope You! 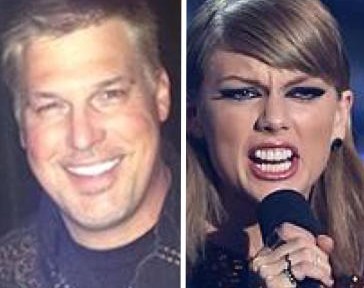 David Mueller, the former radio host of “Ryno and Jackson” on Denver’s KYGO, has filed a lawsuit against Taylor Swift, claiming she falsely accused him of groping her two years ago. Swift’s claim cost the 20-year radio veteran his $150,000 a year job.

The incident took place in mid 2013, when Mueller was meeting Swift backstage for a photo op at the Pepsi Center. Mueller and his girlfriend posed with Swift for a photo, and Swift thanked the couple and left, according to the suit. The suit says Mueller was later approached by a member of Swift’s security team, who accused Mueller of touching Swift inappropriately, and was then escorted out through an exit door. Mueller was reportedly fired two days later. “Mueller steadfastly maintains that no inappropriate contact of any kind occurred between him and Ms. Swift,” reads the filing. In a statement, Swift’s publicist said Mueller’s employer was given evidence of the incident, and made its own decision with the information granted. h/t variety

Mueller notes in the suit that over the years he met many stars, including Britney Spears, Heidi Klum and Gwen Stefani, without incident.