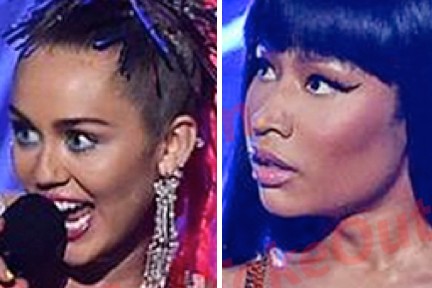 Nicki Minaj totally called out Miley Cyrus at the 2015 MTV Video Music Awards on Sunday, and we are learning from source close to MTV that the tense moment was not staged.

A journalist attending the event confirmed that Nicki and Miley’s beef was in fact unscripted. Nicki closed out her Hip-Hop Video of the Year acceptance speech by hitting back at Cyrus after the VMAs host criticized Minaj in an interview with The New York Times. After thanking various supporters, Minaj turned to Cyrus and said, “And now, back to this bitch that had a lot to say about me in the press. Miley what’s good?” h/t mto

Check Out MILEY CYRUS FACE . . . When Nicki Minaj THREATENED HER . . . She Was TERRIFIED . . . There Was Nothing STAGED About That LOOK OF PANIC On Miley’s Face!

Cyrus’ surprise showed on her face. She appeared visibly taken aback when the camera panned to her following Minaj’s words.