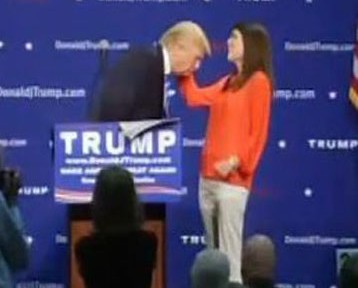 After being referred to by a Spanish radio host as, “El hombre del peluquín,” translated, “the man with the toupee,” Donald Trump, speaking at today’s campaign stop at the TD Convention Center in Greenville Upstate, invited a random woman on stage to inspect the hair and finally put those hair-raising rumors to rest.

Trump, who has adamantly denied wearing any hair support, (with the exception of hair spray,) bowed to the woman for a quick look-see. (See video below.) “You have to do an inspection because this is getting crazy,” Trump said. “But we don’t want to mess it up too much because I do use hair spray.”

When Trump asked the woman for her verdict on his locks, she concluded, “Yes, I believe it is [real].”