Cheerleading Coach Fired For Wearing BOYS IN THE HOOD Shirt, Not Those Boyz 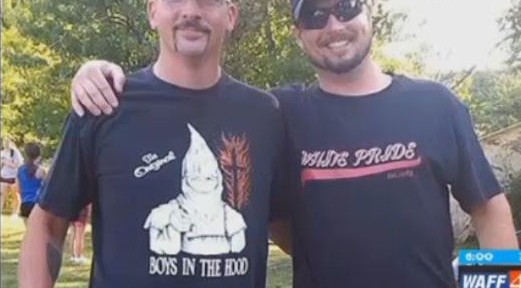 Alabama youth cheerleading coach, Brian McCracken was forced to resign after showing up at a practice wearing a “Boys in the Hood” t-shirt.

The shirt did not feature the singing group by the same name, it depicted a KKK member in a hood, burning a cross. McCracken’s fellow coach, Kayleigh Tipton, objected to the garment and file a complaint, and then she was also forced to resign.

To make matters even worse, Tipton was also asked to leave the team, and she believes it’s because she complained about the shirt. But her husband Cody Tipton told reporters that she did what had to be done for the couple’s child, who is biracial. “It’s hard for a biracial child that is 4 or 5 to understand what racism is,” he said. “It just outrages me and a lot of other parents but no one will stand up to it because of the consequences their children will get.” h/t complex

We get the whole “Go team! Go team! Who do we mean? We’ll say it loud,
Because we’re proud,” sentiment, but these racist jokers went a bridge too far.