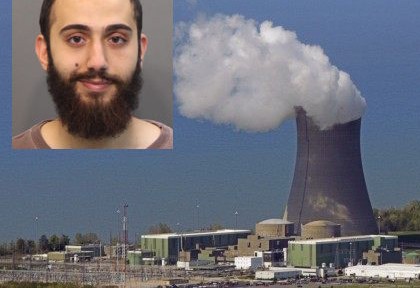 Todd Schneider, a spokesman for FirstEnergy Corp., says Muhammad Abdulazeez was conditionally hired as an engineer at a nuclear plant in east Cleveland. He spent 10 days there before he was let go because he failed a background check.

He would not say why Abdulazeez didn’t pass the screening process.

However, FirstEnergy is not just “an Ohio company.” It provides electricity to multiple states, including the majority of land in Pennsylvania and West Virginia:

FirstEnergy’s 10 regulated distribution companies form one of the nation’s largest investor-owned electric systems, based on serving 6 million customers in the Midwest and Mid-Atlantic regions. Stretching from the Ohio-Indiana border to the New Jersey shore, the companies operate a vast infrastructure of more than 194,000 miles of distribution lines and are dedicated to providing customers with safe, reliable and responsive service. h/t breitbart

While Abdulazeez failed a “background check” for a private company, the FBI insists it has no evidence he should have been monitored as a terrorist threat. “Abdulazeez was not in any U.S. databases of suspected terrorists, a U.S. official said,” reads a CNN report. “His only reported prior trouble with the law was a DUI arrest in April. His court hearing was scheduled for July 30.”