Baltimore Police Wagon Sign: Enjoy Your Ride, Cuz We Sure Will! 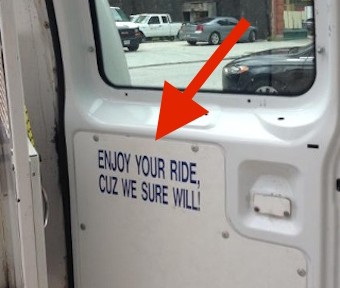 As six Baltimore City police officers await their fate after being charged in connection with the death of Freddie Gray, a Baltimore City Police Department van was captured displaying a curious sign informing potential riders to “Enjoy your ride, cuz we sure will!”

The Baltimore City police department has launched an internal investigation after a civilian shared photographs of a sign inside a city police wagon with a local news outlet. Baltimore City police released a statement, saying: “The nature and the posting of wording in one of our transport vehicles is both concerning and unacceptable. We have recently become aware of the wording and have begun an internal investigation to determine all the circumstances surrounding its placement and to identify the person or persons responsible for its posting. This is an incident that is being taken very seriously.” h/t wbaltv

The sign’s placement makes it clear that this is a message for people who are arrested to see after they’re put in the back of the van and the doors are shut.