The Dallas police headquarters was ambushed by someone in an armored van early Saturday.

The shooting prompted a pursuit involving dozens of police vehicles. The gunman is currently in a standoff with police after being cornered along Interstate 45. 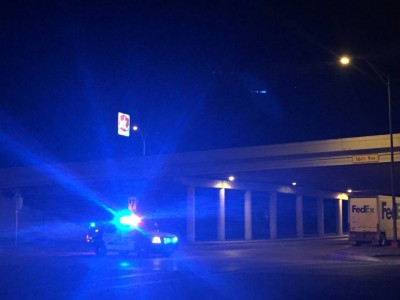 Unconfirmed reports indicated that more shots had been fired at that location. People began reporting shortly before 12:30 a.m. that a gunman had fired into Jack Evans Police Headquarters on Lamar Street, south of downtown, but authorities had not released any details officially.

Initial eyewitness reports indicated that no ambulances had been called to the police building, and there were no reports of injuries yet.

One woman who said she lives nearby posted online that the gunfire she heard sounded like a shootout. h/t dallasnews

SWAT personnel were reported to be working to take the gunman into the custody as southbound I-45 near Interstate 20 was shut down and people were being urged to stay shelter in place or stay away from the area.

Dallas police officer running for his life after realizing the threat was the armored van! pic.twitter.com/TRjePXFZJS

Dallas police officer runs for more cover from one car to the next. I thought he got shot #dphqshootout @dallasnews pic.twitter.com/Y3qbbcaHil