Want to own Ronda Rousey‘s 2005 Honda Accord LX? Here’s your chance! 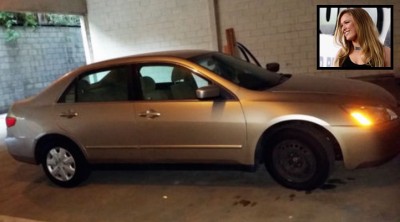 There are many of Ronda’s personal belongings inside the car including medals, UFC programs from past events, patches, hats, and all kinds of random Ronda items. You can see from the eBay photos what all the items are that are located in the car. We (Ronda’s family) like to joke about all of the cool things you find in Ronda’s car. Every time you open the door, it’s is like an archeological dig! Also, Ronda did glue a few medals, patches, coins, and figurines to the inside of her car which probably aren’t going to come off.

Below you can also view two YouTube videos of Ronda dancing, singing, and having fun in her 2005 Honda Accord.

This car has 156,098 miles on it as of 5/31/15. Ronda’s mom might drive it to the grocery store or to the 7 Generation Games office once or twice before the car is sold, so the car might have about 10 additional miles on it before the new owner picks the car up.

The seller reveals the vehicle has one little glitch, it is in need of a new tranny.

“The car runs fine, but does need a new transmission. The new owner will need to pick the car up in Los Angeles, or make their own shipping arrangement.”