Drake Bell TWEETS n’ DELETES Caitlyn Jenner And WE GOT IT!

While most are congratulating Bruce Jenner for changing into a new and improved version of himself, Caitlyn Jenner, Drake Bell took another stance by telling the world that he will still be referring to Jenner as “Bruce.”

Bell more than rocked the social media boat Monday by tweeting to Caitlyn that as far as he is concerned, he is still a ‘he’ and will always be a he. 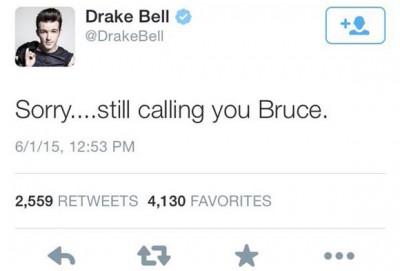 He then promptly deleted the controversial tweet and went into damage control mode..

Bell then tried to explain to no social media avail..

I’m not dissing him! I just don’t want to forget his legacy! He is the greatest athlete of all time! Chill out! — Drake Bell (@DrakeBell) June 1, 2015