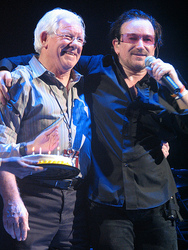 The supergroup is just about to kick off a string of huge concerts in the city of angels.

Law enforcement sources tell TMZ … Dennis Sheehan was found unconscious in his room at the Sunset Marquis Hotel. We’re told paramedics were called to Sheehan’s hotel room around 5:30 AM for a reported cardiac arrest. He was pronounced dead on the scene. Sheehan — who was in his late 60s — has been U2’s tour manager for more than 30 years. His death came just hours after the curtain went down on U2’s first of 5 concerts at the Forum in L.A. h/t tmz

Our thoughts and prayers go out to Sheehan’s family and friends at this difficult time.