The founder of megachurch Crystal Cathedral, Rev. Robert H. Schuller, has died in a California care facility. He was 88. 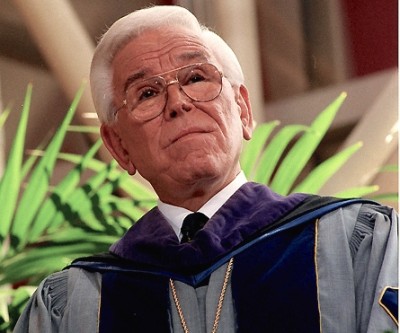 Schuller started preaching in 1955 at a rented drive-in theater. In 1970, he began a TV ministry called the “Hour of Power.” In 1980, he built a soaring glass cathedral to house his booming ministry. At its peak, the program reached 20 million viewers. In 2006, Schuller’s only son, Robert A. Schuller, was installed as senior pastor. But the organization was hit by falling membership and revenue, and he left in 2008. h/t abc7

The church filed for bankruptcy in 2010, and Schuller was forced into retirement by the board in 2012.