Residence reported feeling and hearing a huge explosion at the ExxonMobil Refinery in Torrance, Ca.

Folks living in the area described the earth shaking similar to an earthquake. 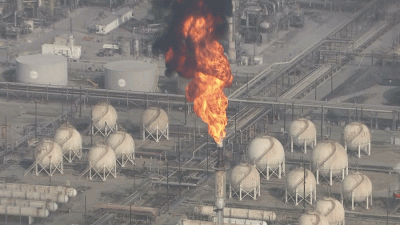 The refinery “experienced an incident that occurred at approximately 8:50 a.m.,” ExxonMobil Spokesperson Gesuina Paras told KTLA in an emailed statement. The blast at the refinery, which is located in the 3700 block of West 190th Street, was described as a “second-alarm fire explosion,” according to the Torrance Police Department. The refinery has activated its flare system, and flames and smoke would be visible in surrounding areas, Deaul said. h/t ktla

Air quality readings were within the normal range and an air quality warning has not been issued, police said.

Del Amo Boulevard was temporarily closed between Maple Avenue and Crenshaw Boulevard, and Torrance police officials were advising that the area be avoided.