Mother SHOCKED After Finding Sea Creature In Can Of Tuna

Zoe Butler, a mother from the UK, discovered something frightening while making her kids lunch.

Butler, 28, knew something was fishy when looked into a freshly opened can of tuna and noticed something staring back. 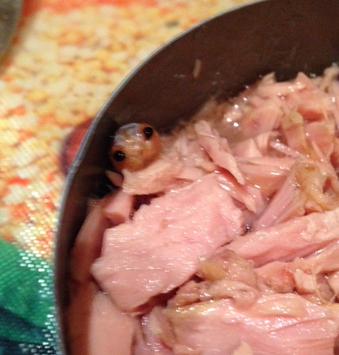 “I opened the top of the lid and saw a purple thing, a gut sack or intestine – then I turned it round and pushed it with a fork and saw it looking back at me, It’s got like a spiny tail along the bottom – it’s quite grim,” she said. h/t ktla

She sent the photos of the creature to Princes, the tuna company. She said she is not attempting to get anything from the company, she just wants to make sure it won’t happen again.