San Francisco 49ers linebacker Aldon Smith, who is eligible to return to the 49ers this week after a nine-game suspension, may become the only player in NFL history – to pay to play the game. 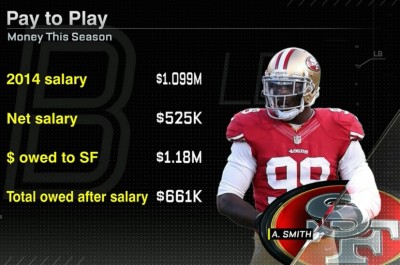 After Smith’s nine-game suspension, his salary this season will be $1.099 million, with the net after taxes being $525,000. The 49ers will take all of that from his game checks this season for money he owes due to signing bonus forfeiture, according to sources. h/t espn

But what he makes this season won’t be enough to cover what he owes the 49ers, so the team will take another $661,000 after this season, sources said.

Smith’s suspension wasn’t reduced to allow him to play Sunday, as many expected because while the linebacker did more than mandated in terms of community service, he did not fulfill the obligations assigned him in terms of his counseling protocol, two league sources told ESPN NFL Insider Ed Werder.