Hazmat teams are on the scene at the Pentagon due to an Ebola scare over reports of a woman exhibiting Ebola symptoms on a tour bus.

The woman had recently arrived from Africa. 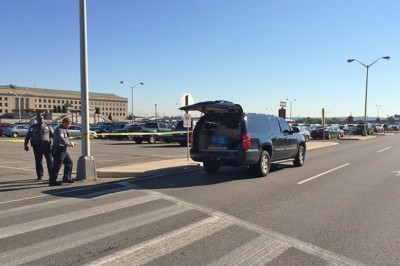 The hazmat team was called out of “a complete abundance of caution,” said a Pentagon Force Protection Agency spokesman.

A large portion of the Pentagon south parking lot has been cordoned off with crime tape, and police are telling those who don’t work at the Pentagon to avoid the immediate surrounding area. The woman has been transported via ambulance to Virginia Hospital Center. The county’s medical director also responded to the call and is at the hospital with the patient, according to scanner traffic. h/t arlnow

The bus was at the Pentagon for a tour of the Pentagon Memorial. Pedestrian and vehicle traffic has been shut down around it.