A Idaho teenager who was the passenger of an SUV used a lighter to set the driver’s armpit hair on fire causing the vehicle to crash.

The 5:30 a.m. crash was reportedly caused by the driver of the SUV, 18-year-old Tristan Myers, avoiding an animal in the road, that is until Myers came clean, telling investigators it had actually been caused by a 16-year-old boy, who set his armpit hair on fire. Myers lost control of the Ford Bronco, rolling the vehicle. 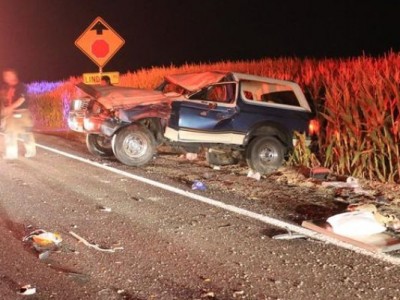 Two girls in the backseat, ages 15 and 16, were thrown from the vehicle. Myers, his front-seat passenger, and a 17-year-old boy remained in the vehicle. None of the teens were wearing seatbelts, deputies say. Three of the teenagers were taken to a local hospital with non-life threatening injuries. Myers first said he had swerved to avoid an animal in the road, but the truth emerged after deputies talked to all the teens. source

Myers, who deputies say was speeding and driving erratically before the crash, was cited for inattentive driving. The lighter-wielding passenger was ticketed for for interfering with the driver’s safe operation of a vehicle.