Philadelphia Eagles running back LeSean McCoy left 20 cents on a $61.56 restaurant bill after dining with three of his buddies at PYT, a popular Philly burger joint.

The PYT server says the table of four was not impressed with the service or anything they ordered. 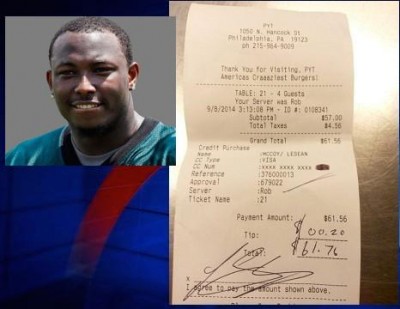 “The other guy had the lobster crab cake. He said no bun then it came out and complained, no bun, no veggies, no sauce,” said K’Nelly. “They gave our food runner a hard time about it being rude to him and the bartender, he was sitting here, 3 friends were around him.” source

PYT posted a picture of McCoy’s receipt on its Facebook page, and the rest is social media history.

In fairness, the server did admit to forgetting the boy’s appetizer..