Nicaragua’s capital was struck by a meteorite that left a 39 foot wide 16 foot deep crater in the woods close to the city’s airport.

The meteorite “appears to have come off an asteroid that was passing close to Earth,” said government officials. 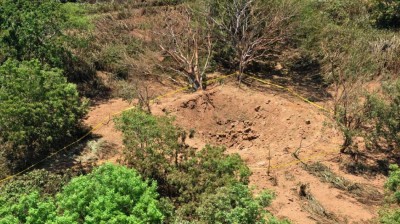 Humberto Garcia, of the Astronomy Center at the National Autonomous University of Nicaragua, said the meteorite could be related to an asteroid that was forecast to pass by the planet Saturday night. “It could have come off that asteroid, because it is normal for that to occur. We have to study it more because it could be ice or rock,” he said. source

Local residents reported hearing a loud boom Saturday night, but said they didn’t see anything strange in the sky.

The site of the crater is near Managua’s international airport and an air force base. Only journalists from state media were allowed to visit it.