Omaha Police officers opened fire in an effort to disrupt a robbery at a fast-food restaurant while filming an episode of COPS.

A COPS crew member, 38-year-old Bryce Dion was shot and killed in the crossfire. The suspect was killed as well. 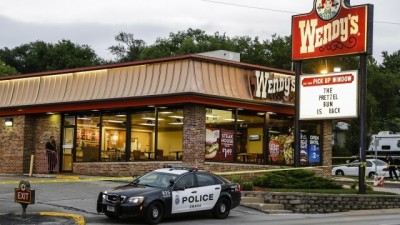 The suspect was armed with a pellet gun that officers thought was a real handgun. The suspect fired from the pellet gun before officers returned fire, Police Chief Todd Schmaderer said at a news conference. He said witnesses and officers thought the robbery suspect’s Airsoft handgun looked and sounded real, but discovered later that it fires only plastic pellets. source

Dion was wearing a bulletproof vest, but a single bullet that hit his arm “slipped into a gap in the vest” and entered his chest. The suspect was struck by the officers’ gunfire, but fled outside of the restaurant before collapsing.