News of Robin Thicke’s death have been greatly exaggerated, mostly because he’s still, (for the moment,) very much alive.

The dyer news spread like wildfire spinning the tall tale that the Blurred Lines singer had committed suicide over his now confirmed failed marriage, and equally failed new album. 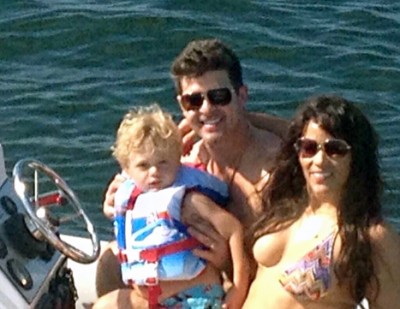 The July 2014 report has now been confirmed as a complete hoax and just the latest in a string of fake celebrity death reports. Thankfully, the singer best known for his hits Blurred Lines, Sex Therapy or Lost Without U is alive and well.

Rumors of the singer’s alleged demise gained traction on Tuesday after a ‘R.I.P. Robin Thicke’ Facebook page attracted nearly one million of ‘likes’. Those who read the ‘About’ page were given a believable account of the American singer’s passing:

“At about 11 a.m. ET on Tuesday (July 22, 2014), our beloved singer Robin Thicke passed away. Robin Thicke was born on March 10, 1977 in Los Angeles. He will be missed but not forgotten. Please show your sympathy and condolences by commenting on and liking this page.”

Hundreds of gullible fans immediately started writing their messages of condolence on the Facebook page, expressing their sadness that the talented 37-year-old singer, songwriter and actor was dead. And as usual, Twittersphere was frenzied over the death hoax.
source

On Wednesday (July 23) the singer’s reps officially confirmed that Robin Thicke is not dead. “He joins the long list of celebrities who have been victimized by this hoax. He’s still alive and well, stop believing what you see on the Internet,” they said.