A Detroit woman caught a Pacu fish, a South American relative of the Piranha, in a Michigan area lake.

Tom and Holley Luft weren’t sure what it was but then they got the fish under a better light that they saw the human-like teeth. That’s when hubby thought it was a piranha. 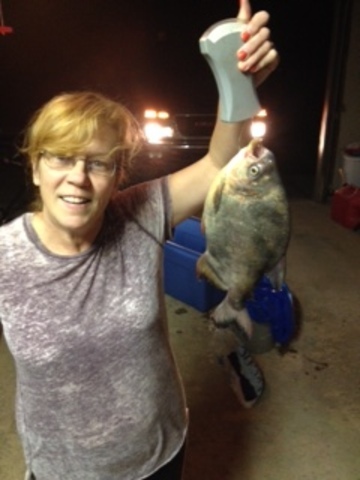 Pacus primarily eat nuts, fruit and small fish, according to the museum. However, expert Henrik Carl told NPR in 2013 thatwhile the Pacu’s “mouth is not so big … human testicles are just a natural target. It’s not normal to get your testicles bitten off, of course, but it can happen.” source

The DNR believes the fish was likely someone’s pet and got too big or too aggressive for its aquarium. The owner may have then dumped it into the lake.

The omnivorous fish have square, human-like teeth and can grow up to 55 pounds in the wild, according to the Museum of Natural History of Denmark at the University of Copenhagen.