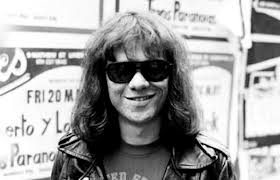 The Ramones official Twitter account announced the news, and New York Rocker Magazine publisher Andy Schwartz wrote on Facebook that Ramone died at 12:15 p.m. in Ridgewood, Queens. He had been in hospice care and was suffering from cancer of the bile duct. source

Our thoughts and prayers go out to tommy’s family fans and friends at this difficult time.