The Secret Service saw fit to allow a man in a horse mask to shake hands with the commander and chief..

It all went down while President Barack Obama was in Denver, Colorado Tuesday night where he got up close and personal with a man donning a horse head mask. 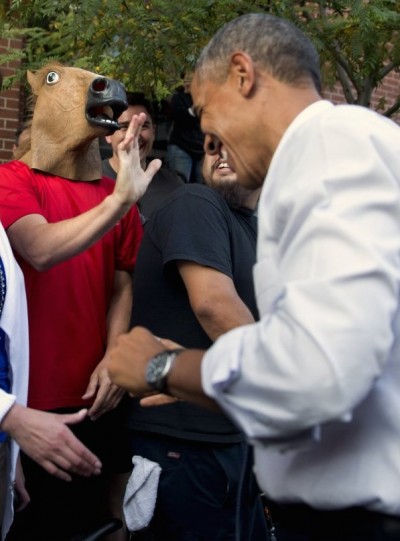 Obama apparently shook hands with the masked man after eating dinner at the Wazee Supper Club with five people who wrote him letters. Following his meal, Obama went into the street to greet crowds that had formed outside the restaurant. According to a press pool report written by Wall Street Journal White House correspondent Colleen McCain Nelson, “one onlooker wore a large horse head.” source

“It’s unclear what message he hoped to convey to the president,” Nelson added.