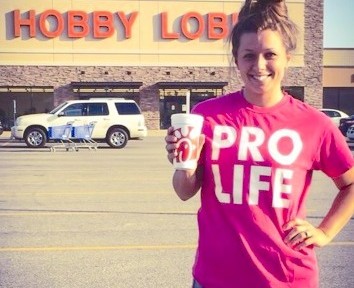 Holly Fisher is a young mother who has earned the nickname “Hobby Lobby Holly,” after posting the following photo on Twitter..

Fisher says a Chick-fil-A and a Hobby Lobby are located right next to each other, so she took the opportunity to post a photo of herself posing in front of Hobby Lobby while holding a Chick-fil-A cup, wearing a pro-life t-shirt. Pop! 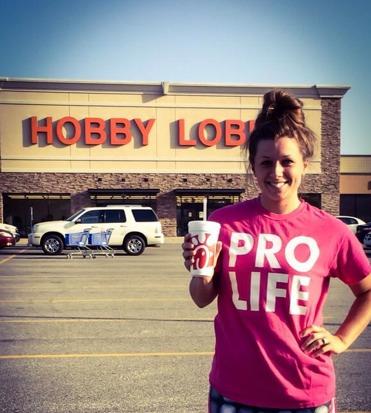 On the day of the Supreme Court’s decision to allow small companies with religious objections to decide not to provide certain kinds of birth control as part of their insurance, Fisher was wearing a “pro-life” shirt and she and her husband went to the fast-food chain, whose leadership has taken a stance against gay marriage.“My husband looked at me and said, ‘you look total right winger right now,’” Fisher said. That’s when Fisher, who had already amassed about 20,000 followers on Twitter for her political views since the 2012 presidential election, convinced her husband, a member of the U.S. military who served in Afghanistan, to take a photo of her outside the Hobby Lobby, holding her Chick-fil-A cup and sporting the “pro-life” shirt. source

Fisher said she knew upon posting the photo that reactions would be a mixed bag based on people’s political views.