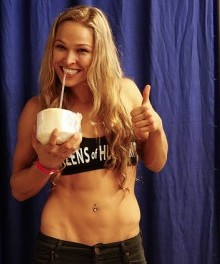 The two met at the center of the octagon, exchanged hands and Rousey, who had previously thrown out a triple jab, connected well with a beautiful right cross upstairs, then a left knee to the body that led to a beautiful judo throw and an immediate follow-up of more than half-dozen punches to Davis before referee halted the fight just 16 seconds after its genesis. Rousey stood and Davis, in half-consciousness grabbed onto her before Rousey walked away and further distanced herself from the rest of the division. source

It was Rousey’s sixth straight title fight dating back to her days fighting for the Strikeforce championship and it was her fourth defense of her UFC strap, which ties her for sixth-longest mark in company chronicle.