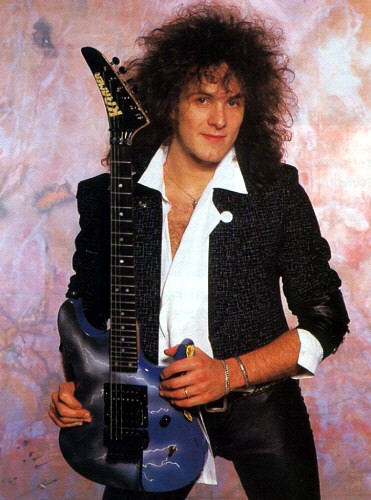 The guitarist went public with his Hodgkin’s lymphoma diagnosis last year, but revealed he was winning the fight against cancer in November. Now, as the rocker kicks off a new Def Leppard tour with KISS, he tells the press the disease is back.

Campbell reveals, “The remission was a little bit premature. It came right back. I don’t know if the cancer came back or it never totally went away, but the initial scan I did last fall after doing my chemo… came back clean. “There was something about it the oncologist was unclear about and didn’t feel good about, so I was referred to another specialist.” The second opinion was not good news for Campbell, and a follow-up scan revealed “there was definitely some growth coming back”. He adds, “I went to Dublin (Ireland) and started to record with the band, we started work on a new record, and as soon as I got back from that, I did another surgical biopsy and that showed that the cancer had definitely come back.” source

This time, the guitarist is getting tough with cancer, revealing he’s part of a “clinical trial” using “new high-tech chemo treatment”.

He explains, “I’m about halfway through it already, and it’s really kind of easy going. It’s the first new drug that’s been discovered for Hodgkin’s since 1977 and they made this discovery in 2011, and it’s actually being pioneered at City Of Hope (in Los Angeles), so I’m part of this research clinical trial that’s going on. “I don’t know how it works, obviously I’m not a medical person, but somehow or other it just manages to target the cancer cells. It’s not like old-school, carpet-bomb chemo, where it kills all the fast-growing cells, so I haven’t experienced any hair loss or any issues with my skin or nails or anything this time around, which is good. “Assuming that it all works and I actually get to a perceived remission stage by August, then as soon as the tour is over in early September I’m going to get a stem-cell transplant, which I can’t say I’m looking forward to, but I’ve been told if I don’t do that, the cancer’s going to just keep coming back every couple (of) years. And every time it’s a little bit more resistant. It is what it is. It could be worse.” In the meantime, Campbell is planning to spend the summer touring with his bandmates, who played the first date of a 42-date trek on Monday night (23Jun14) in Utah. The guitarist insists not touring was not an option for him: “When I was going through the chemo last year and the band said to me, ‘We’ve been offered these shows. Can you do them? Do you want to do them? Or we can get someone to cover for you?’ I said, ‘F**k that… I’m not having someone else do my job’. “There’s nothing worse than sitting around the house concentrating on the negative.”