Nine-year-old, Spencer Collins of Leawood, Kansas, thought it a good idea to open his own front-yard library so neighbors could share books, mingle and learn.. Then the government stepped in..

City officials shut down the makeshift library over violating a city zoning ordinance. 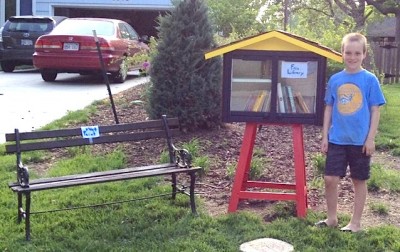 Collins loves reading. “It’s kinda like a whole ‘nother world, and I like that.” the boy told reporters.

Last month, Collins had an idea for how to share his passion for literature: a little free library. The Little Free Library Movement began in 2009 when Todd Bol of western Wisconsin built a mailbox-like structure that held books and placed it in his front yard with a sign to “take a book, return a book.” Little free libraries have since popped up around the world. On May 11, Mother’s Day, Collins put out his own little free library, complete with children’s classics like Madeleine L’Engle’s A Wrinkle in Time and Roald Dahl’s The BFG. source

But a month later, his parents received a letter from officials saying the library violated the city’s zoning ordinance and needed to be removed or they would be fined. The city prohibits people from having structures on their property that are detached from the physical house.