These Are The Kids That Stabbed Their Friend 19 Times

12-year-old girls, Morgan E. Geyser and Anissa E. Weier had been planning a murder for months..

Morgan E. Geyser was allowed to have two friends over each year for her birthday. 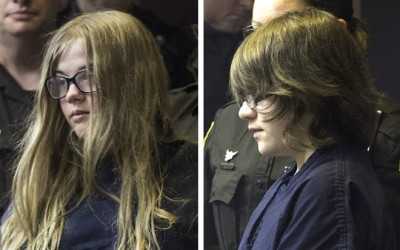 This year, she’d celebrate on May 30. That is the day she and Anissa E. Weier would try to kill their friend during a sleepover.

On Monday, the two Waukesha girls were charged in Waukesha County Circuit Court as adults with attempted first-degree intentional homicide, each facing up to 65 years in prison. Their victim, another 12-year-old from Waukesha, was stabbed 19 times by either Geyser or Weier or both, according to a criminal complaint. All three attend Horning Middle School in Waukesha. source

Geyser and Weier are being held on $500,000 bail each. The pre-teens attempted murder, they told police, to pay homage to a fictional character who they believed was real after reading about him on a website devoted to horror stories.