Two of the stupidest goddamned crooks in the world, stole a kid’s iPhone and then proceeded to taunt the victim’s mother, by sending her a selfie, OF THEMSELVES! The pair was quickly located and arrested.. 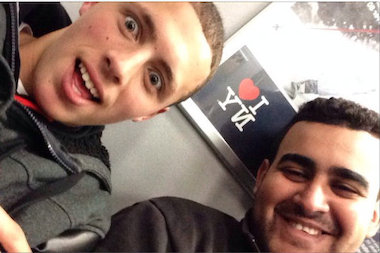 Do you think these guys qualify as world’s dumbest crooks? Comment below!

The two teens from Manhattan got their dumbasses arrested Saturday after they stole a boy’s iPhone at a Hell’s Kitchen teen club — and then sent a selfie to their victim’s mom, an NYPD spokesman said.

As they rode the subway away from the nightclub, they snapped a selfie that showed both of their grinning faces and sent it to the mother of the phone’s owner, the NYPD said.

Investigators released the selfie to the media on Friday and the next day the duo was arrested on charges of petit larceny and criminal possession of stolen property, a police spokesman said. source

Alexander, of Bed-Stuy, surrendered to police. It was not immediately clear how Nekrouf, of Fort Hamilton, was apprehended, the spokesman said.