A contracted construction worker is out of a job and facing a huge fine after he failed to pay for a drink refill during his lunch break at a Department of Veterans Affairs hospital. 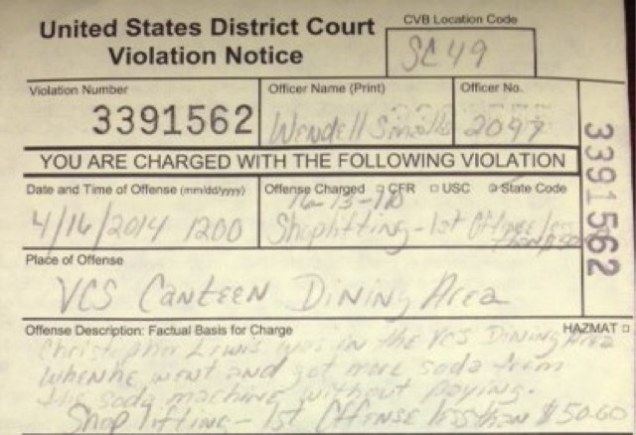 Christopher Lewis was ticketed by the Federal Police Force at the downtown Charleston, S.C., hospital and charged with stealing government property because he was unaware of the 89-cent fee to refill drinks..

“As I was filling my cup up, I turned to walk off and a fella grabbed me by the arm and asked me was I going to pay for that, and I told him I wasn’t aware that I had to pay for that,” Lewis told WISTV, “I want everybody to know that I made a simple mistake, that I’m not a thief, that I’m not dishonest. source

Lewis even offered to pay the 89 cents, but the cops wouldn’t let him. Instead, he was taken from the cafeteria to a back room, ticketed $525, and told never to return to the facility.

That means Lewis, a contracted worker, is out of a job.

“I’m done there, at the VA hospital. I’m not allowed to go on the premises anymore. I asked him can I still work on the job site and just bring my lunch and not got to the cafeteria and he said he wanted me off the premises,” he said.

In a statement, the hospital wrote, “Shoplifting is a crime. The dollar amount of the ticket is not determined by VA as it is a Federal citation. The citation may be paid or the recipient may choose to appear in Federal court to contest it.”