Brooke Burke-Charvet former host of Dancing With the Stars crashed her Maserati into a fence in the Calabasas area of Los Angeles county. 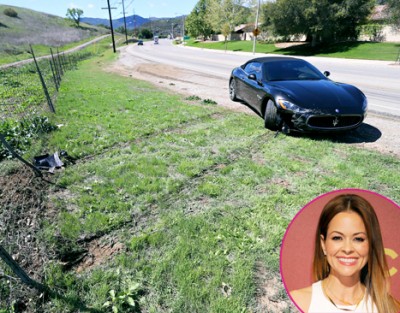 Damage can be seen to the car as well as visible skid marks into the fence along with a couple of expensive broken bits and pieces.

TMZ reported that the former Dancing With the Stars host said the crash was the result of a faulty steering wheel. Burke-Charvet, 42, took to Twitter to dispel any rumors surrounding the wreck.

“Rough morning. Accident on my wAy 2 work. Tons of cops & of course photogs, TMZ will have fun with this one. Poor Mazeratti..yes I was sober,” she tweeted. “Btw. Of course officers had me do a sobriety test. Thx 4 all your concern. I’m totally fine. Scary accident but not so bad. Today is my lucky day actually #grateful”
source

The former professional dancer made headlines in February when she was fired from her role as a host on the hit ABC competition show and replaced by Fox Sports reporter Erin Andrews.