Families Of MH370: WE WANT PROOF

Grief stricken family members of Malaysian flight MH370 are demanding some kind of tangible proof that the plane crashed in the Indian Ocean and sunk to a depth of 23,000 feet.. 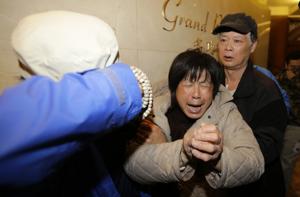 A flotation device washing up on shore, a buoyant case full of beauty products, a mini-cart and all those little bottles of booze, anything. The families are demanding some kind of evidence be produced before they give up all hope that their loved ones are indeed dead.

By now, we know Malaysia said that the missing jetliner had crashed into the Indian Ocean, but that announcement was greeted with primal screams by Chinese relatives who are demanding that Kuala Lumpur share all the evidence it had on the incident, as well as provide any single piece of wreckage.

All 239 people on board are now presumed dead, airline officials concluded on Monday, but after a full 18 days, the family members are not buying the official theory, just yet.

Inmarsat, the British company providing what is being called groundbreaking satellite data, showed the Boeing 777’s last position – in the Indian Ocean west of Perth, Australia. That information led officials to release a statement:

“This is a remote location, far from any possible landing sites,” he said. “It is therefore, with deep sadness and regret, that I must inform you that, according to this new data, Flight MH370 ended in the southern Indian Ocean.” source

Relatives of those on board first learned the bad news in a Malaysia Airlines SMS text message: 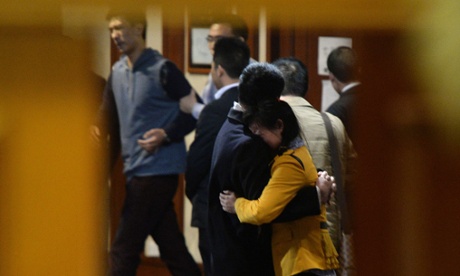 “We have to assume beyond all reasonable doubt that MH370 has been lost and none of those on board survived.”

After the message was transmitted, there were hysterical scenes at the Beijing hotel where many of the relatives of those on board were staying.

A Reuters reporter on the scene saw at least four people being carried away on stretchers.

The so-called black boxes – the cockpit voice recorder and flight data recorder – records what happens on board planes during flight. At crash sites, finding the black boxes soon is crucial because the locator beacons they carry fade out after 30 days. But 18 days in – and not as much as a blip..

Flight MH370 vanished from civilian radar screens less than an hour after taking off from Kuala Lumpur on March 8. No confirmed sighting of the plane have been made and there is no clue as to what could have possibly went wrong, mechanically or otherwise. Tons of conjecture, but not a shred of physical evidence.

So many questions remain, like why did someone on the flight shut off the plane’s communications systems? Why did military radar tracking show it turning west and re-crossing the Malay Peninsula, apparently under the control of a skilled pilot?

We would love to have your input! So go ahead and leave your thoughts below.