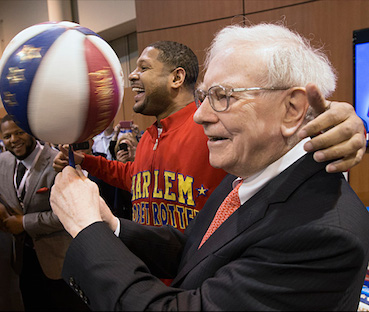 Though the contest captured the imagination of many seeking fabulous riches, not one single billion-dollar entry was able to escape the round of 64 without picking at least one game incorrectly. Memphis’ 71-66 win over George Washington eliminated the final three brackets that were eligible to win $1 billion. So, 25 games into the Round of 64 – or 37.3 percent through the tournament – every single billion-dollar bracket was busted. (Depending on who you ask, the odds of picking a perfect bracket sit somewhere between 1 in 128 billion and 1 in 9.2 quintillion, give or take a few decimal points.) source

One perfect bracket – “Brad’s Breathtaking Bracket” – remained after the 25th game in Yahoo’s Sports Tourney Pick ’em, but that bracket was not entered in the billion-dollar challenge.

The assault on perfection, however, started long before Friday night. Upsets by Dayton, Harvard and North Dakota State thinned the herd on Thursday before Mercer’s shocker over Duke culled the pack even more. By Friday, after Stanford beat New Mexico, only 16 perfect brackets remained.

Now, however, that number stands at zero.