Chances Are Those Old Clothes You Donated Ended Up In Africa

Cleaning out your closets and getting organized for spring is a great feeling — and so is seeing the piles of old clothes you’ve ignored for years bagged and ready for donation. 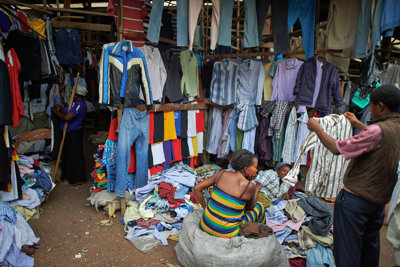 Between the space you’ve just created in your own life, and the perfectly good clothing you’re about to bestow on others through a charity like Goodwill or the Salvation Army, it’s pretty much a win-win situation. Right? Not necessarily. That’s because the castoffs you think are doing so much good are more likely being sold at a profit in Africa — part of an elaborate overseas resale system that’s effectively snuffing out other countries’ own vital textile industries.

“Most Americans are thoroughly convinced there is another person in their direct vicinity who truly needs and wants our unwanted clothes. This couldn’t be further from the truth,” writes Elizabeth Cline in “Overdressed: The Shockingly High Cost of Cheap Fashion.” “Charities long ago passed the point of being able to sell all of our wearable unwanted clothes,” she notes. source

According to sustainable apparel consultant Shannon Whitehead, here is what actually happens to your old suits, shirts, and sweaters — part of the 4.7 billion pounds of clothing donated by Americans annually — once you shove them into that big metal drop box: Some of the items end up in landfills; some of them get recycled into rags and insulation; and much of the clothing ends up in the markets of sub-Saharan Africa. When they arrive at charity shops, the clothes are sorted, with only about 10 percent deemed good enough for sale in the retail shop; the rest is sold to textile recyclers, which ship tons of clothing in good enough shape for resale to countries including Ghana, Cameroon, Congo, Tanzania, and Rwanda.

So on one hand, you could feel OK about the fact that the profit for the tons of castoffs is going to support valuable social programs run by the charities — programs for seniors, single moms needing work, families living in poverty, people in drug rehab, prison populations, and homeless people. But on the other hand, there’s the worrisome viewpoint that, at the same time, the cycle of shipping used clothes overseas is contributing to growing poverty in other nations. That’s because, as more and more of our clothing discards are sent overseas, there’s less chance that African countries will develop their own textile trades. In the past decade, in fact, local industries such as garment-making and tailoring, have collapsed, creating mass unemployment.

Further, a recent article in the Root points out:“The psychological — and, as a result, financial — blows of the used-clothing industry have been crippling. What seems to be carried over, along with the previously worn clothing, is that old-colonial mentality of ‘ours is better than yours,’ the often unspoken belief heralding all that is Western as superior, and all that is African as inferior.”

So what’s a spring cleaner to do? If you don’t want to be a part of the overseas consignment market, here are some other used-clothing recipients to consider:

• You can give used business attire to organizations such as Career Gear or the Women’s Alliance, which provide interview-worthy outfits to disadvantaged individuals seeking employment.

• WebThriftStore.com is an online marketplace accepting used items from clothing to electronics. It’s affiliated charities, including the American Heart Association and the ASPCA, benefit from the profits.

• If you’d like to recycle your clothing and be the one to keep the profits, try a service like thredUP, which receives your shipment of castoffs, sells them online to individual shoppers, and then gives you 80 percent of the profits, either in cash or shopping credit. (Note, however, that whatever thredUP doesn’t accept gets passed on either to charitable partners or to textile recycling companies — which could mean your old clothes end up in Africa, after all.)