GROSS! See What A NYC Woman Found In Her SOUP!

A Queens woman was enjoying a bowl of soup yesterday when she discovered a most gut-wrenching spoonful..

Natalie Estrella was eating at Mi Mundo Restaurant in Far Rockaway when she discovered a giant insect floating in her soup.

The antennae-wearing encroacher bears striking resemblance to a silverfish or a grasshopper. 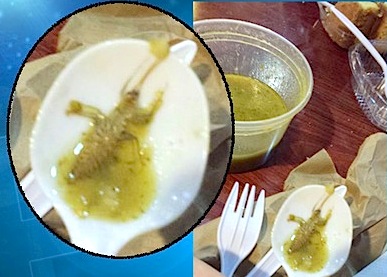 Estrella notified a waiter, who disposed of the offending soup. He could have left us in a state of ignorance, however he returned to explain to Estrella that the restaurant “has these bugs all over the pipes.”

Understandably grossed out, Estrella visited nearby St. John’s Episcoal Hospital, where she was treated for “insect ingestion.” “Today was the worst day of my life. I felt dizzy, my stomach started hurting and then I threw up,” she told PIX 11. “I can say now I am traumatized by eating out.” Estrella plans to file a lawsuit against the restaurant. source

It is gross! But the worst day of her life?