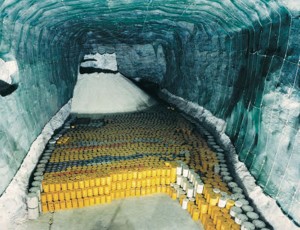 An air-monitoring alarm went off at 11:30 p.m. local time Friday indicating unsafe concentrations of radiation inside the Waste Isolation Pilot Plant in what DOE officials said appeared to be the first such mishap since the facility opened in 1999.

The ‘MISHAP’ comes just 10 days after a truck hauling materials caught fire inside the facility.

As of Sunday, the source of the high radiation readings had yet to be determined, and a plan to send inspection teams below ground to investigate was put on hold as a precaution.

“They will not go in today. It’s a safety thing more than anything. We’re waiting until we get other assessments done before we authorize re-entry,” DOE spokesman Bill Mackie said.

WIPP is the nation’s only disposal site for plutonium-contaminated waste from nuclear bombs. The football-field-size disposal rooms are located 2,150 feet below the surface of the earth in the Permian salt beds about 26 miles east of Carlsbad, New Mexico. The fire occurred in the northern part of the underground mine, near the salt handling shaft from which smoke billowed at the surface. The shaft is more than 1,500 feet away from the nearest waste disposal rooms. Federal law allows WIPP to hold up to 6.2 million cubic feet of radioactive and hazardous waste; slightly more than half that amount has been emplaced since March 1999.